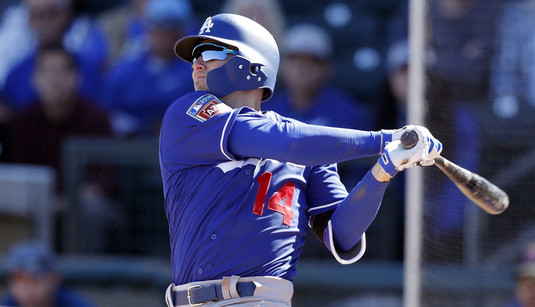 THE GAME: The Dodgers beat the Angels 6-2 before an announced crowd of 8,215 on Thursday afternoon at Tempe Diablo Stadium.

HITTING REPORT: Kiké Hernandez singled and scored on Austin Barnes’ double against Felix Peña in the second inning. Barnes, who’s hitting .333 this spring, later scored on an Ezequiel Carrera single. … Hernandez (2 for 2) is hitting .400 in Cactus League play. … In the fifth inning, Cody Bellinger doubled and scored on a bases-loaded walk by Barnes. A two-run single by Daniel Castro completed the Dodgers’ three-run rally. … Castro (2 for 4) is batting .417. … Edwin Rios went 0 for 4 with three strikeouts. … Brad Miller made his first appearance in the field, subbing in to right field. He walked and struck out in two plate appearances.