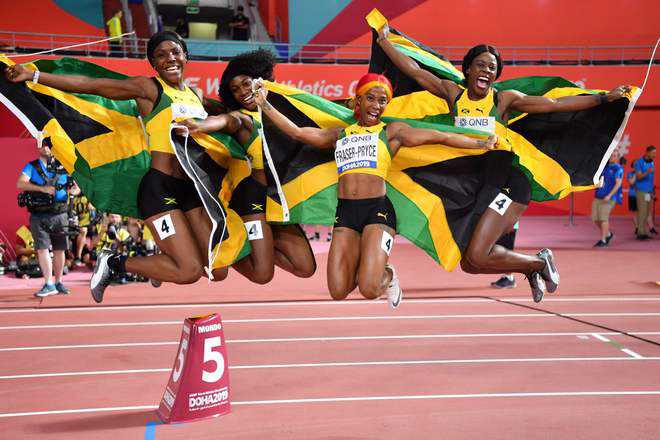 Image by The Tribune India.

Article via The Tribune India.

Doha: Jamaica stormed to World Championships gold in the women’s 4x100m relay on Saturday, beating Britain in a battle that featured 100 and 200m winners Shelly-Ann Fraser-Pryce and Dina Asher-Smith.

Since 2005 the United States and Jamaica have dominated the event at the Worlds, with the Americans topping the podium four times, including two years ago in London, and the Jamaicans three.

In Doha, though, the fight for gold came down to Jamaica and Britain, the Caribbean nation returning to the top of the podium with a time of 41.44sec. Britain took silver in 41.85 and the US the bronze in 42.10.

In a surprise twist Fraser-Pryce and Asher-Smith, the two sprint stars of the Championships, were not given the responsibility of anchoring their teams but instead went head-to-head in the second leg down the back stretch.