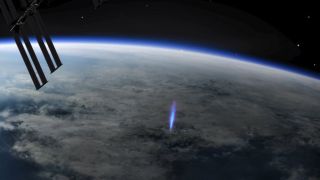 Blue jets can be difficult to spot from the ground, since the electrical discharges erupt from the tops of thunderclouds. But from space, scientists can peer down at this cerulean lightshow from above. On Feb. 26, 2019, instruments aboard the space station captured a blue jet shooting out of a thunderstorm cell near Nauru, a small island in the central Pacific Ocean. The scientists described the event in a new report, published Jan. 20 in the journal Nature.

The scientists first saw five intense flashes of blue light, each lasting about 10 to 20 milliseconds. The blue jet then fanned out from the cloud in a narrow cone shape that stretched into the stratosphere, the atmospheric layer that extends from about 6 to 31 miles (10 to 50 kilometers) above the Earth’s surface.