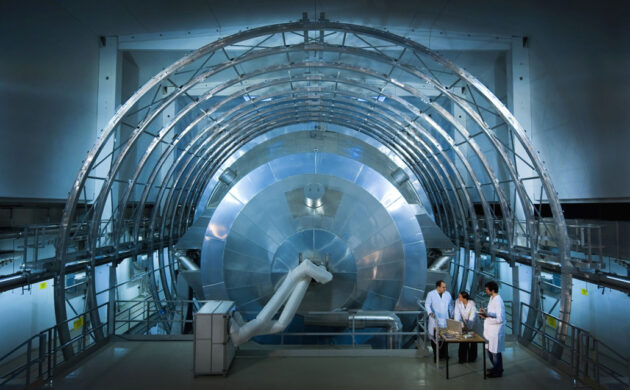 The KATRIN neutrino experiment is located on the grounds of the Karlsruhe Institute of Technology in Germany. (KATRIN Photo)

Article by Alan Boyle via GeekWire

Scientists from the University of Washington and other institutions around the world say they’ve reduced the upper limit for the mass of the neutrino by half.

Thanks to findings from the Karlsruhe Tritium Neutrino Experiment, or KATRIN, physicists now know to a 90% confidence level that the neutrino has a rest mass no greater than 1.1 electron volts, or 1.1 eV. The previous upper limit was 2 eV.

Nailing down the neutrino’s mass could solidify scientists’ grasp on the Standard Model, which describes the subatomic world in fine detail. It could also open a path to the mysterious realm beyond the Standard Model.

Neutrinos are among the ghostliest particles in the subatomic zoo. Billions of them pass through our bodies every second, but they’re virtually undetectable.